When you get married, you have to legally sign a document attesting to your decision to be married. The legal document can come in many forms but most have a brief section about what each party declares for the union, how they will treat each other and how commitment will be displayed (change of names usually). In a D/s relationship, it is not unfamiliar to also draft a contract in which to declare your intentions with each other. These are not required, of course, and some people will proclaim the invalidity of these documents to anyone who will listen.

I feel that the creation of a contract has some very useful and valuable importance to a growing relationship.

What are D/s contracts?

A contract is a document written up by one or both parties entering a relationship. This contract specifies the responsibilities of the people involved. It is not a standard operating procedures document and should not list all of the rules you are to be given. The important new behaviors can be listed, such as how each person should be addressed and basic behavior required of each. Keep your rules and protocol or procedures to a separate, easily changed document.

A contract has a set start and ending date. This can be a short term agreement such as for a weekend or it can be a renewable contract on an agreed upon date or annually. D/s contracts can also be permanent in nature, but for the purpose of this essay, I will be covering renewable contracts.

Can we put anything we want in them?

As I stated earlier, the contract is not for every small measure of control in the relationship. It is a declaration of the commitment you both wish to have and basic means for expressing certain term changes, violations of the contract and means for dismissal. If you feel you need to write up a long list of rules at the get go, don't. Submission is a learning process and handing someone a book and saying memorize it by tomorrow just isn't going to happen. For this reason, the rules and structure of the relationship should be in a different, living document.

I strongly suggest D/s contracts be drafted for each relationship. Using a default one is nice to start, but you will encounter areas that you want to customize for the relationship each time you sign the contract. Use other people's contracts as an example, but just like your relationship; it's different so only use it for inspiration.

Are they legally binding?

D/s relationship contracts are not legally binding. They have no validity in court and you can not use them for disputes after a relationship ends. Contracts of this nature are more about the spiritual connection, the emotional and physical commitment established by the people signing it. They are morally binding. This makes it very special to the people involved.

Why should I consider the use of a contract?

You should consider the use of a contract if you are in a temporary situation and are taking a collar for a short duration. This provides an element of dedication to the experience you wish to enjoy and also lays down a foundation for how the term will play out.

Contracts also give a sense of importance to the relationship. You may feel a stronger need to work hard at problems as they arise because you have a contract. You may also feel more committed to achieving everything laid out so that your contract will be renewed.

How do I draft a contract?

Since D/s contracts are not legally binding they can take on any form that you wish them to. They can be laid out like a business contract or they can be hand-written forms that are signed. It depends on what kind of relationship you are looking for on what kind will work best for you.

Start out by making a list of all the things you think are important to have in the contract. Then go through the list and decide which ones belong in the rules list instead. Rules that could potentially evolve or diminish are good for the rules list, but not for the contract.

Then have your partner look at your list and work together to add or subtract items as necessary. Once you have an agreed list, write it up in full sentences. Decide on how long the contract should remain in effect and how a renewal is to take place; whether that be an amendment to this contract or a new drafted contract. Add a declaration at the top. Something like the following is basic and works in any situation.

We, the undersigned, declare to abide by the following items below with full commitment and awareness of our role in these items during the term this contract is in effect from to .

What do I do if my partner breaks the contract?

How did you decide to handle violations in the contract? If you didn't define how things were going to be resolved then it's dependent upon you to decide what to do. The contract should have a stipulation about what to do with a violation of the contract. This can be from a re-evaluation up to a termination of the contract. It's completely up to you. Since it's not legally binding, the people involved are the only ones responsible for carrying this out.

Where can I find examples of a D/s contract?

If you are interested in seeing what other people have come up with for their D/s contracts, you can usually find some interesting variations. Here are a few that I came up with while looking for research materials.

Some Criteria for Consensual D/s Contracts 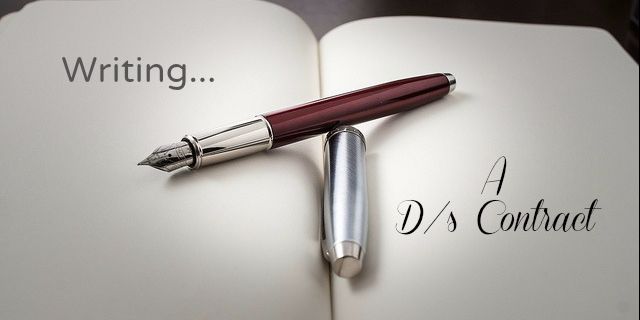